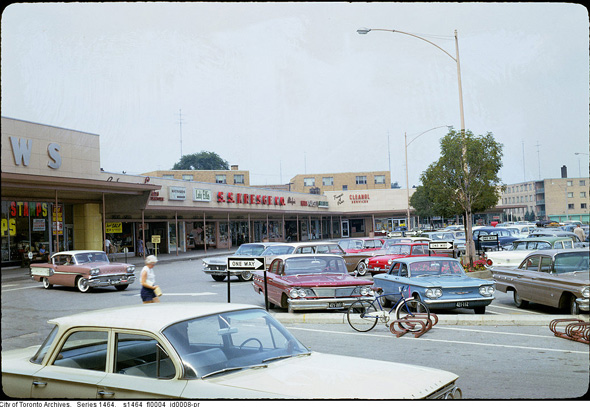 For over 60 years, the HVVRA has provided support and advocacy for the interests and concerns of residents. A prime example of the Association’s hard work is the resolution of re-development plans for Humbertown Shopping Centre.

Originally, Humbertown Shopping Plaza was a family-owned business. Its construction began in 1954. The open-air, one-storey strip mall contained retail shops, most independently owned and operated, anchored by Loblaws. On the south east corner of the site was a gas station. There was parking for several hundred cars.

Humbertown primarily served residents of The Kingsway and Humber Valley Village including 43 low-rise apartment buildings that had been erected at the end World War II to house waves of new immigrants.

In 2010, the plaza was acquired by First Capital Reality (FCR). FCR intended to capitalize on new City of Toronto land use zoning, “Mixed Use” which would incorporate residential, retail and commercial space.

In 2011, FCR announced its intentions to overhaul the entire plaza site (buildings and parking lots) and presented its plans to the HVVRA Board of Directors.

The proposal included a complete redevelopment of the property: a multi-stage demolition of the existing shopping centre, construction of significantly expanded retail and commercial office space, multiple residential condominium towers, and the replacement of most surface parking with underground parking.

HVRRA expressed serious concerns about the magnitude of the changes proposed given it would be in the centre of long established, low-rise residential housing and apartments. FCR’s reaction was to move forward with its proposal and consider neighbourhood input only if a public meeting was held.

The HVVRA Board of Directors committed to monitoring the progress of the proposal and to advocate for opportunities for community input. The Board needed to strategize, and mobilize its resources.

Subsequently, in 2011 HVVRA launched a major campaign against the proposed redevelopment in which residents blanketed the area with Save Humbertown lawn signs and packed public meetings to voice their opposition to plans they said were “too big, too dense, too tall” for their suburban neighbourhood. Recognizing the need for professional help, the Board hired an architect and began to execute a comprehensive fundraising campaign which led to the development of a Better Humbertown proposal in response to FCR’s design.  Many community meetings were held and we were able to reach a consensus on the following:

With further community approval, the HVVRA Executive did the following:

The original proposal submitted by FCR in January 2012 included commercial uses on the ground and second floors and five mixed-use buildings, totalling nearly 22,000 square metres of floor area, and 28 three-storey townhomes. Building heights ranged from 11 to 21 storeys. 682 residential units, including the townhomes, were proposed.

In September 2012, after many meetings with the HVVRA board, FCR submitted a revised proposal with three, rather than five, towers ranging from nine to 21 storeys, and over 3,000 more square metres of open space. The Board considered this proposal to remain excessive in scope and at that point increased our fundraising efforts dramatically, retaining the services of a lawyer and an urban planner.  This required substantially more fundraising and we credit our residents and neighbouring communities for their generous support. We were now ready to proceed to the Ontario Municipal Board (OMB).

On December 13, 2013, after 5 tough days of OMB mediation, the HVVRA and FCR unanimously approved a mediated design of the Humbertown Shopping Centre. This proposal was also endorsed by the City of Toronto. Building heights ranged from three to ten storeys with 604 residential units, including 28 townhomes. Open space increased from 5,657 square metres to 6,215 square metres, while floor space dedicated to commercial uses remained the same, again distributed across the ground and second floors of five buildings. There was a new design language for the development emphasizing a clean but tactile modernism. In the proposal, FCR also agreed to:

In 2014, the HVVRA received the Excellence in Planning award from the Ontario Professional Planners Institute (OPPI) for our contribution to the approved Humbertown Master Plan.  The OPPI said that it “sets a precedent for similar sites especially in the suburban context”.  According to Urban Toronto, the planning involved 3 years of “one of the most complex community development processes which included a major campaign led by HVVRA” .

On August 13, 2019, Tridel and The HVVRA co-hosted an Open House at the new Presentation Centre to showcase the future “Edenbridge on the Kingsway” condominium scale model. The HVVRA was asked to welcome the attendees. Here’s what we said:
“In early 2014, when the OMB mediated settlement agreement for all of Humbertown Plaza was finalized, your Board began working closely with Tridel and First Capital Reality on the Site Planning Process to determine ‘the look’ of the buildings. The Board’s mantra and guiding principle has always been “this is Humber Valley Village, not Liberty Village.” We wanted the look and texture of entire project to reflect and “fit” in this neighbourhood. Slick black towers were not going to cut it. We envisioned terraced architecture to capitalize on the 30-degree angular plane we had fought hard for, brick and Humber stone, large windows, green roofs, green space, and mature trees along Royal York. Tridel heard us, loud and clear – and ultimately, we established a shared vision for how “Edenbridge on The Kingsway” would look.

Back in 2013, the Board had assured residents that we would stay close to Tridel as the project evolved, and we did. About two years ago, Tridel proposed a significant revision to the project, namely, to extend townhouses along Royal York instead of the back of a large retail unit, ostensibly a drug store. We were overjoyed at the suggestion! Planning, not so much. We argued there would be plenty of retail anyway, and that townhomes facing single family homes across the street was good planning. Planning ultimately agreed.

The results speak for themselves, 182 new condominium residences including 24 garden townhomes. We hope you like what the future looks like.”

In 2019, the first phase of redevelopment started with the Edenbridge on the Kingsway condominium. The development plan is primarily residential with potential small retail. Occupancy is slated to begin in 2025.

Currently, other than the upcoming renovations and upgrades to the South Wing, there are no immediate plans for more demolition or building at Humbertown but that will likely change sometime in the future.